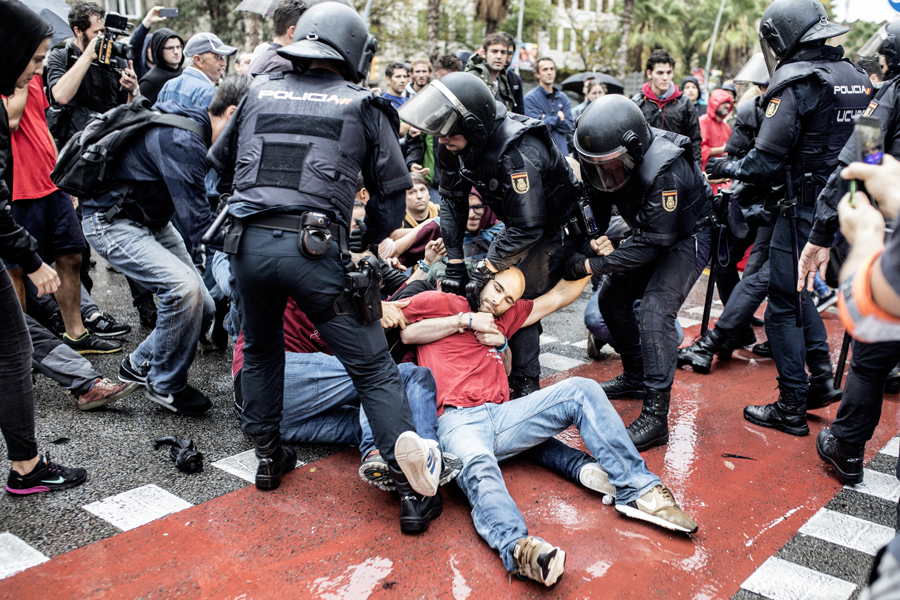 On Sunday 1 October 2017, more than 844 people were injured by the Spanish police forces while they were voting in the referendum for the self-determination of Catalonia, not recognised as legal by the Spanish Government.

Pictures of the police beating violently citizens that wanted to express their opinion peacefully about the independence of Catalonia have toured the world, and are being largely condemned by political, intellectual and social personalities. The commissioner for the Human Rights Council of the United Nations has requested an investigation about the facts occurred that day.

Article 2 of the Treaty of the European Union (TEU) states that the Union is based upon values as respect to human dignity, freedom, democracy, equality, the rule of law and the respect towards human rights. However, on Sunday 1 October 2017 some of these values were not respected in Catalonia.

Independently from our individual feelings on the Catalan referendum, it is clear that the European institutions cannot omit nor remain silent regarding the generalised violence deployed by the Spanish police. The violence executed by the Spanish police on civil population affects the European values and makes explicit that this is an issue that goes beyond the label of “internal matter”: it is an issue about protection of values, rights and liberties of the European citizenship living in Catalonia.

We, as members of Xarxa d’Entitats Europeistes de Catalunya (XEEC), a network of non-profit organisations committed to the defence of the European project, want to express in this manifesto that:

• We condemn the use of violence and police repression and other coercion methods deployed by the Spanish National Police and the Spanish Civil Guard against the Catalan people on Sunday 1 October 2017. As the spokesperson of the European Commission said on Monday 2 October: “violence can never be a political instrument”.
• We demand a more vehement and robust condemn, against the violence used by the Spanish police on civil population, to the institutions of the European Union and to the different political stakeholders.
• We demand to the EU institutions and to all the different European political stakeholders to advocate for international mediation in order to lower the social and political tension and resolve the current political conflict happening in Spain. We consider that when the people’s will goes beyond the mere rule of law there is a need for political dialogue as a democratic solution to lower the social unrest and to update the law.
• We applaud that there will be a point of the European Parliament’s plenary session of Wednesday 4 October dedicated to what happened in Catalonia the 1 October. We expect this will serve for the institution representing the whole European citizenship to defend it and to condemn the violence deployed by the Spanish police.

Additionally, we also use this manifesto to highline the model behaviour of the Catalan citizenship, who has always acted peacefully.

As signatories of this manifesto, we believe that it is time for the EU to act in order to lower the tension and to avoid greater harm to the Spanish democracy and to the civil population.

The European institutions have the opportunity to approach the European citizenship, especially the Catalan citizenship, by defending political dialogue. They must condemn all sorts of violence, which undermines European foundational values seeking to promote peace in Europe through a closer Union between all European countries. If the EU does not react on this aggression against civilians, it will be in a compromising position before the Catalan people, who has always been pro-European and could become Euro sceptical.

News originally published on the website of the Network of Europeanist Entities of Catalonia.