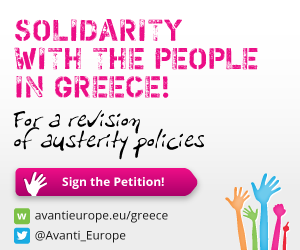 Avanti Europe! is starting its activities with a first campaign aimed at engaging European citizens to show solidarity with the people in Greece and call for a revision of the existing austerity measures in Europe. This online campaign was launched on the 25th of March 2013 (Greek National Day) and it will end on 9th of May (Europe Day). It runs simultaneously in Germany, France, Netherlands, Spain, Italy and Greece. The campaign consists of a video clip and a petition text that will lead to the Avanti Europe! website and social networks, developed in 7 different languages. The results will be disseminated to European decision makers.