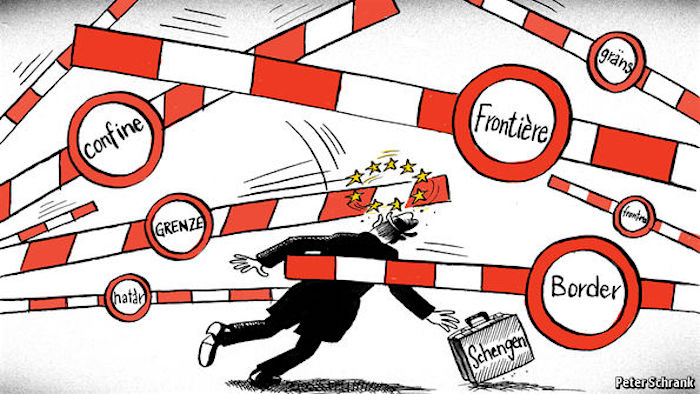 Borders are the past. Do not dismantle Schengen!

Written by Union of European Federalists on 15/02/2016. Posted in Featured, News

The Schengen system, together with the euro and the single market, are the most advanced and visible achievements of European integration.They are key elements of a political project of unification that has guaranteed unprecedented peace and prosperity to the citizens of Europe.

The issues of migration and security are bound to remain long-term challenges. If national governments choose to respond by re-establishing national borders checks and building fences in a selfish and doomed attempt to keep problems in their neighbours’ backyard, they will solve neither the issue of migration nor improve the security situation.

Such moves would only divert resources away from more effective European measures. Most of all, they will inflict a lethal blow to people’s belief in Europe as a project of integration, freedom and solidarity. If the European project regresses, the European economy will suffer, European influence in the world will be further diminished and democracy will come under pressure in many countries. The threat of Europe turning back to a dreadful past of divisions and fratricidal wars will haunt us once more.

To cope with the refugee and security emergencies, a European strategy and European solutions, at supranational level, and with full respect of European values and achievements are required. At this moment, this means that:

As such steps impact on national sovereignty, their completion is only conceivable within a plan to relaunch European political union, according to a clear and definite time frame.

Confronted with the challenges of the future of the Euro and the future of Schengen, the European Council should oppose any proposals to suspend or dilute any European achievements and address how to relaunch European political unity as soon as possible.

The Union of European Federalists (UEF), is a supranational political movement founded in 1946 dedicated to uniting Europe along federal lines. Horitzó Europa / UEF Catalonia is member of UEF