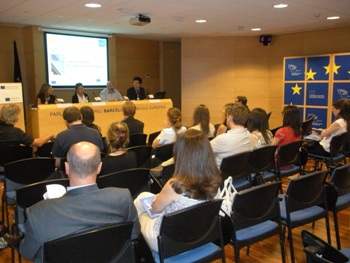 More than 20 people attended the presentation of this issue of the journal Àmbits, jointly organized by the Catalan Association of Political Scientists and Sociologists (COLPIS) and Horitzó Europa. COLPIS Dean Ms Anna Parés chaired the event, in presence of two of the contributors to this issue: Josep Coll (Political scientist and ambassador of the EU to the Republic of Cape Verde) and Elena Rodríguez (graduate in law and Secretary General of Horitzó Europa). The president of Horitzó Europa, Kolja Bienert, closed the ceremony, which was attended by the head of the European Commission office in Barcelona, Mr Manel Camós. Simultaneously, the journal issue was launched at the headquarters of the delegation of the government of the Generalitat of Catalonia in Brussels with Martí Adroher, Johan Haggman, Lluís Balcells and Joan Manuel Lanfranco, all contributors to this issue.